Floyd’s Record Shop and Flat Town Music Company were both founded by Floyd Soileau in 1956 and 1957 respectively, and were cultivated from a part-time job selling records to supplement his radio disc jockey income at KVPI in Ville Platte, Louisiana. His record sales, made during breaks in between dee-jaying, became so popular that eventually he was told by the radio station’s management to choose: spin records at the radio station, or sell them. Soileau decided to leave the radio station in 1957 in order to sell and produce records, and the rest, as they say, is history.

James Floyd Soileau was born in 1938, in the Faubourg/Grand Prairie area, a rural area located a few miles northwest of Ville Platte, Louisiana. Floyd’s Cajun father, grandfather, and great grandfather played fiddle. His brother played fiddle and accordion. Typical of Cajun French families at the time, Floyd spoke no English until he was six years old when he attended the 1st grade. In 1956, during his radio disc jockey stint, while still in high school, Floyd and his brother traveled to a New Orleans record distributor and purchased $250 worth of inventory and a $60 phonograph. With this he opened a small record shop in a small room of the radio station.

Soon, Floyd gave up his DJ job for his newly established Floyd’s Record Shop. Interest in the small town record source grew. Recordings of Cajun music were in relatively short supply at the time. Legendary producers like George Khoury (Lyric & Khoury labels) and Eddie Shuler (Goldband Records) were having difficulties with establishing a supply of recordings. Shuler’s star artist, Iry Lejeune, died an untimely death and Khoury’s titles were quickly going out of print because the record manufacturing plant in California which he used was lost due to fire, along with his source materials. Other producers of the time, like Jay Miller in Crowley, LA, had somewhat left the Cajun genre for other styles like Rhythm n’ Blues. Floyd soon recognized the necessity of “waxing” the talent of the “local” Cajun and rock n’ roll musicians. Shortly thereafter he got his first opportunity to make a recording of his own and form his first record label, sort of. Floyd partnered with Mamou jukebox and nightclub operator Ed Manuel to record Milton Molitor and Austin Pitre performing the “Manuel Bar Waltz” and “Midway Two-Step” and released singles on the Big Mamou label. It was a success for all. Floyd then recorded Vee-Pee (as in Ville Platte), for his own label. His first recordings were pressed in Nashville and released as 78s and 45s in 1957. Word of his regional record label spread and Soileau was soon approached by several local Cajun musicians, including Aldus Roger, Austin Pitre, Adam Hebert, and Lawrence Walker, about recording their songs.

In 1958, Soileau dissolved his earlier record labels and founded two new labels, Swallow (a play on the pronunciation of his last name) and Jin (named for his soon-to-be-wife Jinver). On the early recordings on the Swallow and Jin Record labels, there was no distinction between genres of music. Soileau released Cajun French music and south Louisiana rock n’ roll (later termed Swamp Pop) on both record labels. Later, the Swallow label was dedicated to French language Cajun releases, and the Jin label to Swamp Pop and its blend of mostly English but sometimes Cajun French music with rock n’ roll, country and New Orleans Rhythm n’ Blues.

Soileau had early success with Jin Records. Rod Bernard’s “This Should Go On Forever” (1958), became a national hit, making it to No. 8 in the Hit Parade and to the Top 20 of Billboard’s Hot 100. Bernard even found himself on American Bandstand. Later Jin hits included Jivin’ Gene’s “Breaking Up is Hard to Do” (1959), Joe Barry’s “I’m a Fool to Care” (1961), Tommy McLain’s “Sweet Dreams” (1966), Johnny Allen’s “Lonely Days and Lonely Nights.” (1959) and Rufus Jagneux’s “Opelousas Sostan” (1973). Other swamp pop Jin stars include Warren Storm, Don Rich, Cookie and the Cupcakes, and The Boogie Kings.

Floyd’s Record Shop soon grew into Floyd’s Wholesale Dist. Inc., filling the gap between the many small music retail stores in the gulf south and the major record labels. Soileau’s wholesale resources enabled him to distribute Cajun and Swamp Pop music on a scale previously unavailable to other producers of Cajun music. Floyd created his own network to distribute the recordings of his and several other local record labels, as well as a mail-order service for Floyd’s distant retail customers.

Floyd’s Record Shop became a south Louisiana icon – a business place of Cajun hospitality with possibly the best selections of recorded south Louisiana music as well as oldies, hard-to-find, and popular music of the day. Floyd advertised on KAAY AM Radio out of Little Rock, AR, which could be heard throughout the gulf south.

A little-known fact about Floyd’s Record Shop is that Floyd Soileau was largely responsible for the Hitachi Rice Cooker wave of the early 60s. Floyd discovered the product’s potential (certified by his wife, of course), became a distributor, and quickly began marketing it into possibly one of the greatest products south Louisiana kitchens have ever seen. Floyd’s distributed Hitachi rice cookers by the truckload, so much so, that it sparked the interest and a personal visit to Ville Platte by Hitachi’s president of the their heating division.

Paralleling the success of his record store and wholesale, Floyd continued to produce more recordings of Cajun and Swamp Pop music. Flat Town Music Company now housed Soileau’s record labels, as well as his growing music publishing catalog. In 1974, taking the advice of Zydeco king, Clifton Chenier, Soileau began producing recordings of Clifton’s music on the Bayou Records label, which soon led to the creation of Maison de Soul Records, which is the first record label dedicated to the soulful, upbeat style of music termed “Zydeco.” He recorded several albums by Chenier as well as the 1980s comeback album of Boozoo Chavis, “Louisiana Zydeco Music,” which included such Zydeco classics as “Dog Hill” and “Motor Dude Special.” Soileau scored his biggest hit with Rockin’ Sidney’s Grammy Award winning “(Don’t Mess With) My Toot Toot” in 1985. Over two dozen versions of “Toot Toot” have been recorded in the U.S., as well as dozens of foreign versions, and has racked several awards, besides the Grammy: The Handy Blues Foundation’s Song of the Year, a 1986 BROADCAST MUSIC, INC (BMI) award, and a 2004 Latin BMI award for its Spanish counterpart, “Mi Cu Cu”. Zydeco legends Rockin’ Dopsie and John Delafose, and more recently Keith Frank, Rosie Ledet, Thomas Fields and Zydeco Force have also been preserved in time in the recordings on the Maison de Soul label.

The 1970s shifted Floyd Soileau into a new direction of the recording business when he built and opened Louisiana’s only phonograph record manufacturing plant. In his plant, Floyd filled the manufacturing needs of thousands of different record labels from all parts of the country as well as his own. Ville Platte Record Mfg. even pressed records of Elvis Presley for RCA in the wake of his death when demand for the recordings overwhelmed the major plants. Floyd’s record plant was sadly destroyed by arson in 1994.

In 1985, Flat Town Music Company became the distribution and music publishing division of the newly formed Swallow Publications, Inc. The Swallow Publications name was decided upon when the opportunity to publish books came about. The book publishing division was created under the new corporate name and books where published about Louisiana music, and later, the Cajun language. Unique books, like the late Rev. Msgr. Jules O. Daigle’s A Dictionary of the Cajun Language and Cajun Self-Taught as well as Raymond Francois’ Ye Yaille Chère! (a Cajun music encyclopedia), are distributed throughout the world.

In September of 2000, the Festival de Musique Acadienne (Cajun Music Festival) in Lafayette, Louisiana, was dedicated to Floyd Soileau and his contribution to Cajun music. In 2001, Offbeat Music, in New Orleans, honored Soileau with a Lifetime Achievement Award for his 40-plus years devoted to recording, producing, distributing and promoting Cajun French music.

Nationally-advertised Floyd’s Record Shop was a main attraction for tourists of Ville Platte and Evangeline Parish for decades. In December of 2012, Floyd’s store closed during it’s 56th year of retail music.  Today, Floyd’s caters to fans of south Louisiana music worldwide through its mail-order catalog and internet website, FloydsRecordShop.com. Local indie artists and labels sporting south Louisiana Roots Music have their CDs wholesale distributed to music retailers throughout the U.S. by Flat Town Music Company. And the record label divisions of Swallow Publications, Inc. continue to operate as independent, regionally oriented roots music labels in an age of media giants. The Swallow, Jin, and Maison de Soul labels continue to issue and re-issue numerous Cajun, Zydeco, and Swamp Pop recordings annually in CD or digital music formats, while additionally, the publishing division of Flat Town Music owns and manages the copyright to over 3,000+ songs.

Floyd Soileau remains as president of the business and as he approaches retirement, his son Chris has taken an active managing role, continuing in his father’s footsteps in doing their part to preserve the integrity of such a vital part of south Louisiana Cajun culture, the music. 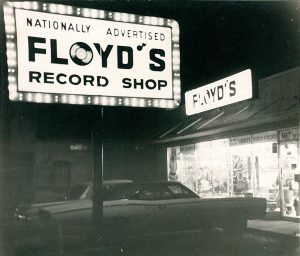 Looking to Buy Some of Our Music?

Head over to Floyd's Record Shop and check out what we have!